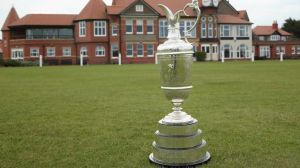 Storylines abound as the Tour makes its annual trek across the pond for the third major of the year, the British Open, which begins Thursday at Royal Liverpool, Hoylake.

Just like the course, we don’t allow slow play on the blog, so let’s get right to the tournament preview followed by predictions from our pros.

Tiger And His Healed Back Are Back – After missing the Masters and the U.S. Open while recovering from back surgery, Tiger Woods returns to major championship competition at the site of one of his most revered major wins.

Woods famously rode his iron play to victory at Hoylake in 2006. Hitting just one driver, Woods negotiated a veritable minefield of bunkers without going into a single one to claim the Claret Jug.

Having played just one tournament since his return (he missed the cut), Woods will have to find his form quickly to have a chance to notch his first major victory since the U.S. Open at Torrey Pines in 2008.

Regardless of how he plays, him merely teeing it up to resume his pursuit of Jack Nicklaus and the major victories record is sure to at least be worth a bump in the Open’s TV ratings.

With just the British and PGA Championship remaining, Woods is looking at another year of losing ground to history if he can’t get a win.

Can Phil Two-Peat? – A year ago, Mickelson book-ended a win at the Scottish Open with astellar Sunday charge to claim his first victory in the Open championship to get him to three-fourths of career Grand Slam.

Mickelson wasn’t even on the first page of the leaderboard when the day began, but he bolted past the field with a birdie binge to pull out a thrilling win, one of the best in recent major championship history.

Mickelson birdied four of the last six holes, including a legendary 3-wood into the par-5 17th to set up birdie. Mickelson’s caddie, Jim “Bones” McKay would later compare the shot to someone driving it through their garage door from nearly 300 yards out. Mickelson put it to 25 feet.

“Best round I’ve even him play,” McKay told Fox Sports.

A year later, Mickelson has just one top-10 finish and his year mostly consists of being the media darling in the run up to the U.S. Open, where Mickelson finished tied for 28th after battling his putter all week long.

Like everyone else, Mickelson spent the weekend chasing Martin Kaymer in futility as Kaymer dusted the field at Pinehurst, which brings us to …

What Can Kaymer Do For An Encore? – Kaymer’s methodical march to the title at Pinehurst after posting opening 65s was pure dominance.

Can Kaymer do it again? History, of course, says it’s unlikely. The last player to win repeat majors was Padraig Harrington in 2008 (the British and the PGA).

Then again, Kaymer only wins the biggies. His only three Tour wins are the PGA Championship and this year’s U.S. Open and the Players Championship.

By the way, according to Bleacher Report, the U.S. Open-British Open championship has been accomplished four times.

Favorite Son, Justin Rose – A year ago, it was Lee Westwood. This year, Justin Rose, coming off consecutive victories, including the Scottish Open, is the countryman of choice.

To do it, he’ll have to pull out a performance his championship resume doesn’t currently qualify him for. He’s missed five of the last six cuts, including the last two years.

But you never count out the hot guy, especially when he’s proven himself consistently to be among the best ball strikers in the world.

Is the Winning Strategy Tiger 2.0? – Can someone just do what Tiger did in 2006 and basically bag the driver?

Well, the course is reportedly only 54 yards longer than 2006 and actually has fewer bunkers, so it seems plausible.

Will Tiger try it again? Will anyone? Tune in very early tomm. a.m. and we’ll start to find out.

Now the predictions from our pros …

Lloyd Porter, Head Professional, Oaks North –I like Justin Rose . Maybe the hottest player in the world. He is from Europe and knows the style of golf.

Scott Butler, Tournament Sales Director at Twin Oaks – Adam Scott by six or eight shots – or Tiger in a close one.

Blake Dodson, Director of Golf, Rancho Bernardo Inn – It’s all about crisp irons and great putting in order to capture the Claret Jug.  Justin Rose is one of the best long iron players on the planet, while possessing an incredible short game

For such a talented player, though, he has had a poor track record at the Open since his breakthrough performance in 1998. I expect Justin to do what Phil Mickelson did last year; Go back to back, winning the Scottish Open and following it up by winning the Open Championship, bringing an end to the drought of Englishmen to win since Nick Faldo in 1992.

Erik Johnson, General Manager, Encinitas Ranch – Rickie Fowler: Time for him to break through and win a big event. After his showing at the U.S Open, he could finally be ready.  Great ball striker with a lot of imagination around the greens.

Martin Kaymer – perfect ball flight for links course (as proven at the US open) and loves to putt around the greens.  At 20-1, he’s also a great value!

I would love to see Tiger win. It would be great for the sport.  With his deteriorating health over the last few years, we may not get to see much more of the brilliance that he has spoiled us with for over 16 years.