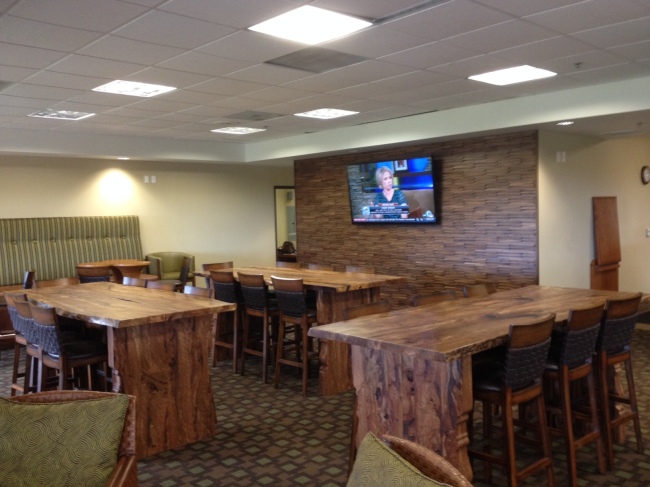 The Encinitas Ranch Golf Course’s remodeled bar and grill, now known as the Ranch Grill, is officially open and will soon be serving a brand new menu.

The Ranch Grill is the third phase of an extensive $1 million renovation of Encinitas Ranch.

Encinitas Ranch General Manager Erik Johnson describes the Ranch Grill as a “coastal casual gastropub” that is meant to encourage post-round camaraderie and be conducive to sports-related social gatherings.

“I want it to be like when I was young and for golf to become more social again, like it was meant to be. When I was a young golf professional, players would hang out at the club for another two or three hours,” he says. “We want people to come in here and settle their bets, talk about their rounds and hang out to watch the game.

“It’s healthy for the game of golf to have people hanging out at the golf course.”

Encouraging that sort of activity started with a complete remodeling of the bar and grill space. Wood paneling now compliments new wood furniture that is grouped around eight television sets, including five large flat screens that will soon be connected to a brand new sound system.

Guests will immediately notice three large communal tables made of aged wood that can seat up to eight people comfortably.

Part of the $200,000 investment included doubling the beer taps to eight. Johnson says this was done in part to cater to the new menu, which will pair local craft brews and pub-type comfort food.

“It’s not fancy,” Johnson says of the new dining theme, “but it is upscale and fun.”

Eight-ounce burgers form the base of the new menu, which will also include sandwiches, salads, an array of appetizers and breakfast.

“We’ve added beer and cheddar to make it an amazing gravy to have over any of our menu items,” Johnson says.

While golfers are, naturally, the immediate target for the new space, Johnson says he has ambitions of the Ranch Grill becoming a dining destination for members of the community for the sheer experience of enjoying a delicious meal in the setting of a beautiful golf course.

“I think it’s going to be a cool place to hang out whether you’re a golfer or not,” Johnson says.

Here’s a sampling of menu items you can look forward to soon: