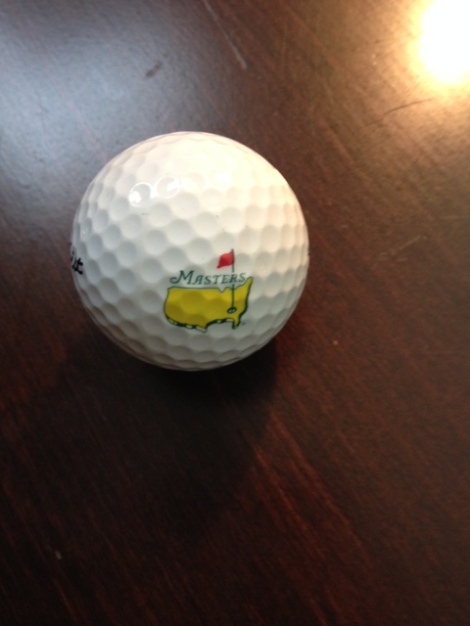 Masters fever has officially set in. Seeing as I can’t watch it yet, I can at least write about it, and this will be brief because I’ve only got one story to tell. It’s about the ball pictured above.

The photo above probably leads you to believe I have been to the Masters. Sadly, I have not. The closest I’ve been is that souvenir ball, which a grateful and generous story subject gave to me after I wrote about his trip to Augusta. The significance of the story was that my friend had gone to the Masters and thus completed his own Grand Slam by having attended all four majors.

At the time, that made him the coolest person on the planet to me, so I wrote about him for the travel section of the magazine I edited at the time. I now know many people who’ve made the hallowed journey, but at the time, he was about the only one. He told the usual stories about the landscape being so pristine it didn’t seem real, about the iconic Butler Cabin clubhouse and about eating a pimento sandwich. (For the record, that’s now two pimento sandwich references in the blog. Who ever saw that coming?)

Anyway, the story I remember most is about him attending a day where they had a split start due to weather, meaning one round needed to be finished before the next could begin. He staked out Amen Corner and watched like five or six groups come through, as I recall, and each group had player put a ball in the water on the par-3 12th, where famously Fred Couples’ ball resisted that fate and basic physics during his victory in 2002.

The detail I recall most is that after the groups came through, prior to the third round, the landscape crews who’d shaved the bank that morning, about 90 minutes after doing so the first time came out and shaved the bank … again. To anyone who knows about course set up, this is rather commonplace, but back then it just seemed a juicy detail and fun and part of the lore of Augusta.

The story ended with my friend noting a player in each of the first six groups of the next round each went in the water. And that was that. I don’t keep much of my old stuff, but that’s one story I kinda of wish I still had hanging around. Oh, well. I’ve still got the ball. And now a blog post.

Is it Thursday yet?