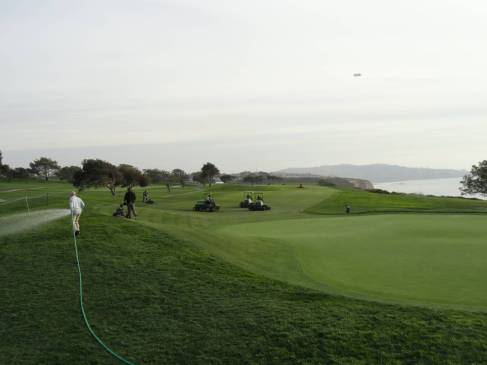 This is my final follow-up post to the preview piece I did for the January issue of Southland Golf where I documented the maintenance practices at Torrey Pines and how they prepare the course to peak for the Farmers Insurance Open.

As a complement to that piece, I wanted to go back during the tournament and document the transformation, so, working again with Torrey’s head maintenance supervisor Paul Cushing, we ventured onto the South Course at about 3 p.m. Thursday. Because of the 30-minute fog delay to start the day, groups were still on the course, so Cushing and his crew had to wait a bit so as to not disturb play.

After spending about 45 minutes watching Cushing and his crew work, I decided it might be best to just analyze the process over one hole, so here’s a look at the work on No. 4 on the South, which is where the grounds crew started and then worked toward the clubhouse.

The following is a little photo essay about the process, which utilizes City of San Diego workers and volunteers each day to return the course to championship condition in about four hours at the end of each round. Cushing also shared that during Farmers week superintendents from across the country will fly in to work the tournament to get experience.

It was interesting to watch them work as a team and restore the shine to Torrey Pines. 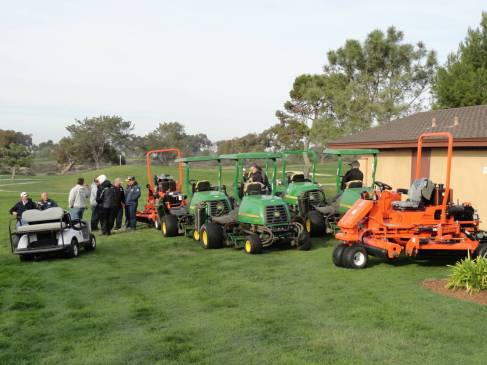 This is the maintenance crew and machinery staged near the 4th hole, awaiting the go-ahead from Cushing. The orange machine is worth noting. That’s a roller. It follows the mowers to help tighten the fairways. It’s a process Torrey added after Cushing worked the U.S. Open at The Olympic Club.

“It really makes a difference,” Cushing says. “It really tightens the turf and gives shots that extra little bounce.”

This captures quite a bit of the process in a snapshot. You can see the three mowers working in tandem in the fairway. They make one pass up and one pass back to keep turning to an absolute minimum. You can also see the hand-mowing on the approach and on the fringe. Then hand-watering takes place green-side and in the bunkers, but not on the green itself. To maintain green speeds, the greens to unwatered, spritzed at most, during the tournament.

One each hole, you’ve got about seven pieces of equipment and at least 12 workers working in unison. 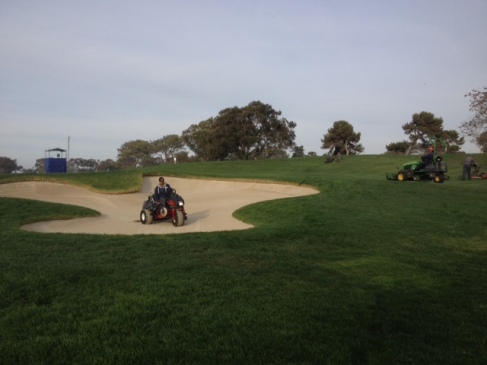 After the round, the bunkers are graded smooth in preparation for them to be hand-raked the next morning. Seemingly little things like bunker contours matter to players. The bunkers are raked to have the grain going toward the hole, which making it more conducive for an approach shot.

This shows the fairways making their return pass and, in the distance, you can see the roller working behind them. 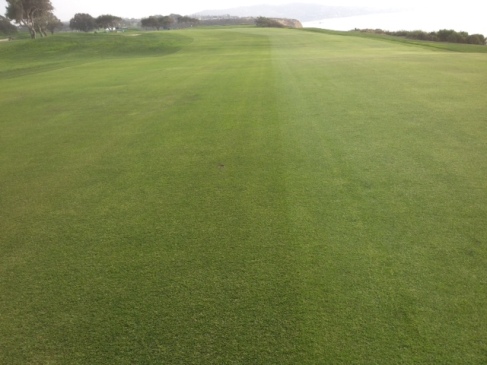 This is the half-and-half look the mowers achieve. As you can see, the effect is created by simply mowing in two different directions. While pleasing in person, the look is largely done for TV, Cushing says.

“We never forget that the blimp is watching us,” he says. “That’s also why our lines have to be perfectly straight.”

The final phase of the transformation, which I neglected to get a photo of, is the volunteer crew that follows the machinery. They’re repairing the divots, which seemingly dot the fairway every two feet or less where approach shots are commonly taken.

If there’s an imperfect divot, the loose turf has to be removed and the divot filled with a seed/sand mixture. It won’t heal overnight, but it at least re-starts the process, Cushing says.

And then the crew moves to the next hole and the process starts all over again until both courses – the North and South – are completed.

The one time-saver, at least on Thursday and Friday, is that hole locations don’t have to be re-cut. The pins and cups simply have to be removed and then replaced. Golfers who played the North Thursday play the South Friday and vice versa.

“They want the golfers to get the exact same golf course the other players had,” Cushing says. “It doesn’t save us a ton of time, but it is one less thing.”

I just wanted to say thanks again to Paul for sharing his time and his photos. I hope readers enjoyed this inside look at the process and gained a little appreciation for what it takes to make a championship golf course really sparkle.

Pro-Spective: No. 7 on the North Course

While the pros largely can be much more aggressive on the North than the South – look at Thursday’s scoring split – Scott Bentley, our resident pro, says this is one hole the pros still have to respect.

“It’s the tightest driving hole on the North. You’ll see a lot of 3-woods here,” he says. “You don’t want to get overaggressive here and bring in the trees on the right.”

Playing at over 400 yards, a 3-wood off the tee still leaves a 7- or 8-iron approach, and Bentley says pros can’t afford to miss long.

“You definitely don’t want to be over this green, because it will be sloping away from you.”

It’ll be interesting to see today how many strokes the players who started on the South can make up on the North, including on No. 7.