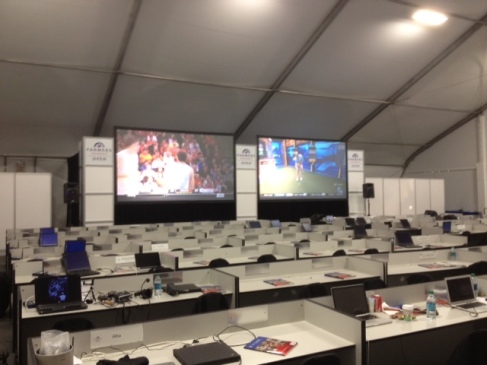 My work space this week

Please excuse the personal post, but this week is a fairly big week for me professionally in that it’s one of those rare times where vision and dreams become reality.

I picked up my press passes and various other media materials for the Farmers Insurance Open at Torrey Pines today and started to plot my week.

Seeing as I was a sportswriter for about 15 years to start my career, and I did cover a string of tournaments on the Nationwide Tour, this whole experience isn’t entirely new to me, but we are talking about the PGA Tour here and that is new, and that’s also part of the dream that brought me to California.

The dream began when a friend from high school who now lives in Chicago invited me to the PGA Championship at Whistling Straights in Kohler, Wisc., in 2010 – you know the one where Dustin Johnson had his “sand trap” trouble?

I’d dreamed of going to be a PGA Tour event, any event really, so having a Major fall into my lap was fairly incredible and exciting even for someone who normally doesn’t get that excited about attending sporting events anymore because of burnout from my career past.

Anyway, before Dustin Johnson made some unfortunate golf history, he changed my life.

The day of the tournament, we walked on to the course in the morning and spent the first part of the day trying to get the lay of the course and get any glimpse of the top Tour talent – Tiger, Daly, Phil, etc. – we could.

We had a pretty good luck, but our best luck came in the afternoon after the crowds had cleared a bit and we had sat down alongside the fairway of a par-4 along Lake Michigan.

We watched about five groups come through and then suddenly two tee balls landed well beyond where any group had been before. Kind of like the tremors in the water glasses in “Jurassic Park,” we knew big hitters were coming over that hill.

It turned out to be Ernie Els and Dustin Johnson.  It was doubly good fortune in that Els was the hot guy at the time and making a run for the day one lead.

Well, we watched them play out the hole and then decided to follow them.

Having birdied the previous hole, Els teed off first on a dog-leg par-5 that was routed around a pond, some scrub and, it being Whistling Straits, naturally some sand traps.

Els played the hole straightaway and fired his tee shot down the fairway. Our group of four had taken up a position to to the right of the tee box. We were talking amongst ourselves when we simultaneously relived we were in imminent danger: Dustin Johnson’s tee shot was aimed at our heads.

On this beast of a hole, unfathomably and unpredictably Johnson was aimed to cut the corner. Before any of us could say a word or breath, much less move, Johnson fired. His ball shot straight overhead and it was like we’d just all had our towers buzzed like in “Top Gun.” We heard the ball spinning furiously overhead.

We all exhaled, realized we were still alive and then laughed a bit nervously about the hole ordeal before group curiosity set in about the destination of Johnson’s tee shot.

We tromped through the grassland around the pond before finally emerging at the fairway to discover one very bewildered spotter looking at the golf ball at her feet. She pointed and asked, “Where did this come from?”

She simply gave an understanding nod.

I asked, “Anybody else try that?”

She pointed back up the fairway and into the pond, OB.

Here’s what Johnson had just done: He carried a ball an insane distance of 375 yards into a 25-yard landing strip. He was about to play a heavy duty par-5 on a major championship driver/wedge.

We missed it that night, but apparently the Golf Channel did an entire segment about this shot.

As the awesomeness of what I’d just witnessed soaked in, I decided then and there I needed to be around this great game played at the highest levels a lot more often.

I’d already been traveling to LA regularly to see a friend and was pondering my own California plan when Johnson hit that shot and kind of wrote the script for me.

Nine months of golf magazine writing and five months of blogging later, I’m more ready than ever to go to work this week.

That work is very much a work in progress as I aim to provided coverage to complement the TV coverage of the tournament, but I have no doubt it’ll work itself out.