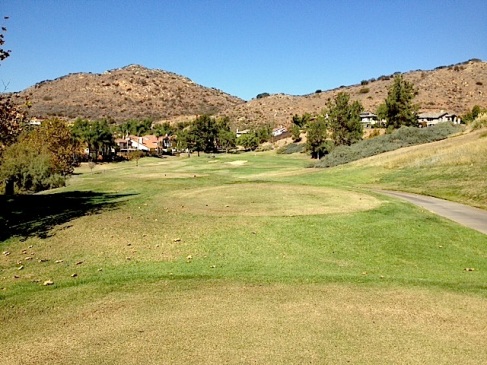 No. 7 at Eagle Crest

When I first started thinking about potential topics for this blog, one of the original ideas on the to-do list was to write about nemesis holes –  you know, those holes that seem to have your number time and time again, or, in the spirit of Halloween, haunt you.

Well, that introductory post to what I hoped would be a reader-driven teachable series for all of us hasn’t been written yet, but I had a teachable moment on this topic on Thursday so I thought I’d publish this post first to kind of get things started. Consider this a prequel post, sort of like “Star Wars” or “Lord of the Rings.”

Anyway, nemesis holes both fascinate and frustrate me, and I had one very notable one (which I’ll write about in a later post) that dogged me for a decade that inspired me to write about this whole concept.

When I think about nemesis holes, I break them down into two types: There are the ones that prey on a fundamental deficiency in your game (say long irons, or your ball flight off the tee), and then those that are well within your ability yet bedevil you over and over for again for reasons that are unclear and then become purely psychological.

The hole I’m writing about today falls into that second category.

I played Eagle Crest in Escondido on Thursday for the first time in months. It’s under new management and the new staff includes two former mentors of mine at golf school.

I probably played Eagle Crest a dozen times in school and always enjoyed the layout and the overall length of the course. It really challenges you off the tee and then challenges you to make smart decisions on your second shots. I learned a lot about the game, and my game, by playing here.

One hole that I never figured out, however, and became a reoccurring train wreck for me, was the par-3 7th. The hole sets up like this: 197 yards from the back tees from an elevated tee to a diagonal oblong green, with traps in front and back.

The hole is pictured above, but what it doesn’t show – and that you can’t see from tee – is a hidden bunker on the right. I know this bunker well because my tee shot has found it over and over … and over. It’s the “Groundhog Day” of golf holes for me.

Why this happens is beyond me. I can only figure it has something to do with wind, but I can tell you clubbing up or down one has only changed the outcome in that I come up short. I honestly don’t believe I’ve ever hit this green in regulation.

I played this hole again on Thursday, and this time I was paired with one of my former instructors, Kevin Connole, the new director of instruction at Eagle Crest.

As we stepped to the tee, I told Kevin of my woes with No. 7 and then, almost on cue, I proceeded to hit a 5-iron that launched low and right and, like a sand-seeking missile, found that same bunker … again to which Kevin said, “Wow, this hole really is in your head.”

And that’s it. I’ve got such a history with this hole that it is all mental.

At this point, Kevin switched into Bob Rotella mode and explained how you go about breaking the pre-programmed bogey funk a nemesis hole puts you in.

“You need to do something, anything, to change your experience,” he said. “That may mean hitting a different club,  playing it from a different tee (if you’re practicing, obviously), or if it’s a par-3, layup and play for a scramble par because that sure beats another bogey.”

Then he really got my attention.

“Or it could mean doing something totally illogical.”

Hmmm, I got a D in Abnormal Psychology in college, but I’m listening.

Kevin pointed at a bunker to the far left of the green, well past the pin. “Hit it there,” he said. “Try to hit it in that bunker.”

Part of the illogic here is that a draw is my dominant shot shape. It just never seems to show up on this hole.

I would’ve needed another club to hit that bunker Kevin suggested, but I stuck with my 5 and swung away. The ball started at the target bunker and then did a gradual, soft fade right at the flag before landing 15 feet from the pin. I took a practice par and gained a new strategy for next time. Thanks, Kevin.

Anyway, it’s stories and strategies like this that I hope will drive this series. I’ve had other nemesis holes successes with other strategies that I look forward to writing about. Hopefully with a little input, and professional supervision, we can put our bogeys and brains together and maybe all knock a few strokes off our cards.

One thought on “Nemesis Holes, Lesson One”