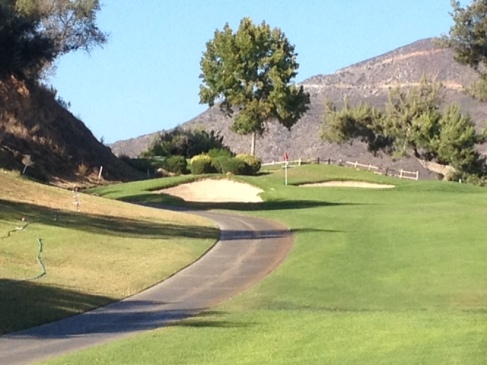 This post was originally going to be about the same experience I’ve had – or witnessed – on two of Pala Mesa’s par-3s that I’ve never seen or heard of happening anywhere else. But then I played the course again and realized nothing about any of Pala Mesa’s par-3s is easy so I thought I’d just go ahead and profile them all.

No. 16 is the shortest par-3 on the course. From the blues, it plays 143 yards, albeit uphill. When you look at the hole, you see a steep face bunker on the front left and a face bunker back right, with the green sandwiched in the middle. What you don’t pay attention to is the cart path snaking to the left and then out of view. It ends up uncommonly close to the green.

While playing in a tournament last year, a player in our group pulled his tee shot left on this hole. He then walked to the side of the tee box and stood there.

I asked him, “What are you doing?”

His reply: “Waiting for my ball.”

Sure enough, about 30 seconds later, his ball came bounding back on the cart path, following a winding path with uncanny consistency. The golfer grabbed the ball and put it in his pocket, choosing to take the max strokes on the hole rather than recover from a negative tee shot. Yes, the ball was going to end up behind the tee box.

Anyway, I’ve heard this is a fairly common occurrence, and I saw the same thing happen on the par-3 No. 3 as well the first time I ever played the course. Crazy stuff. So when I write  full review of Pala Mesa, right on No. 3 and left on No. 16 will be prime “Do NOT Hit it Here” material.

But what they lack in distance, they make up for in difficulty by being tough to club due to the wind and even tougher to putt, with slick, undulating greens. And wicked sand traps guard part of the fronts of all of them.

We’ve already talked about 16 in-depth. Here are the hole details on the other three (using yardages from the blues).

No. 3, 166 yards – This is the longest of the four and plays into a narrow, oblong green with heavy mounding off the left side.

The hole often plays into the wind, making club selection tricky and bringing the traps into play for a very tough recovery if you miss short. But if you go long, you’re likely OB as there’s not much room. It’s a one-club green, and you’ve got to pick the right one.

Anyway, missing right here would be a good miss, save for the cart path repercussions we discussed. Miss really right and you avoid the path and have a safe chip, especially since the pin is often on that side of the two-tiered green.

I parred this hole the first time I played it. I haven’t been so fortunate since.

No. 7, 159 yards – Another narrow, sloping green with sand traps short that get a lot of play. And if you miss short right AND miss the trap, your ball runs into a ravine, where you may be blocked by a tree. Also, long is gone again. So hit the green or look at a killer up-and-down. 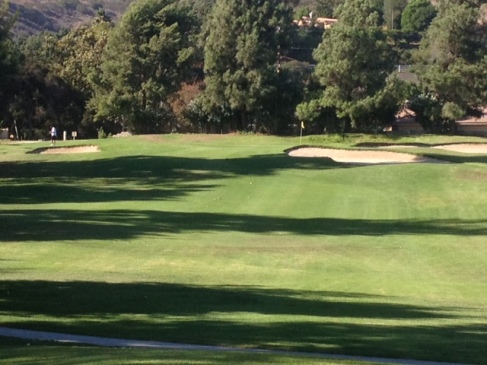 No. 14, 151 yards – Plays uphill and to a crosswind, so take an extra club. Many don’t and are left to fight there way out of a huge bunker complex. This green is deeper than the other two, so you’ve got room if you go a little long. And left is an OK bailout.

When you reach this green, putting again becomes the issue. I get the yips just thinking about some of the green speeds I’ve seen on this course. Makes it tough to charge the hole, even for birdie. In fact, that’s how birdies become bogies here. Remember, par is always a good score on these par-3s.

If you haven’t played Pala Mesa, it’s just off the 76 in Fallbrook. If you go, get ready for a test. I first played here my first week at the Golf Academy. I shot well over 100 and seriously doubted if I’d ever have the game to match this course.

Well, I broke 90 the other day, so, yes, I can now play this course competently, but the green speeds were off. When they’re fast, this course can be very tough.

Even when I’ve hit well, I haven’t made putts here, and that tends to wear you down over a round and eats at your confidence.

Take one hole at a time here and over time hopefully you’ll come to appreciate, as I have, the good test of golf that Pala Mesa offers. But if you hit the cart paths, you can’t say I didn’t warn you.